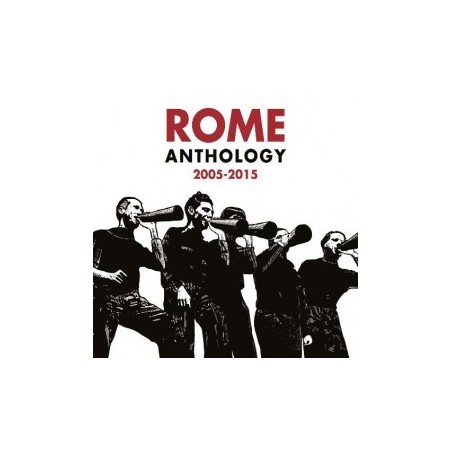 man with his guitar on an otherwise empty stage. A shroud of blue smoke. A lonely spotlight. A timeless aesthetic of solitude and submersion radiates off this picture, an aesthetic reappearing time and time again in 20th century music history: the restless seeker, the bohemian troubadour. Jerome Reuter embodies, breathes and feeds this aesthetic. A devoted traveler himself, Jerome Reuter has been expressing his musical visions with his project ROME since 2005, bleeding himself out on ten albums (and various other official releases) in as many years. Jerome is part of a long tradition of lonesome guitar heroes, outcasts moving about restlessly, pursued by their dreams and demons, dedicated to a life beyond the pale. Jacques Brel, Johnny Cash, Townes Van Zandt, Tom Waits, Leonard Cohen, Michael Gira, Nick Cave – architects of melancholy like these have left their footprints in Jerome Reuter's artistic expression. His music unites American folklore with Chanson and the angst-ridden tristesse of English Post Punk – ‘Chanson Noir’, as he once called it. Looming above all this is his distinctive, deep voice. A voice you want to believe knows all about man's true nature and purpose. The protagonists of ROME's lyrical world are history's forgotten heroes and outsiders, most notably of the 20th century: Anarchist rebels (as on “Flowers From Exile”, 2009), the French resistance (“Nos Chants Perdus”, 2010), Southern Africa's struggle for freedom (“A Passage to Rhodesia, 2014) or revolutionaries & underground fighters such as those on ROME's ambitious trilogy “Die Aesthetik Der Herrschaftsfreiheit” (2011) inspired by the works of Peter Weiss and Pablo Neruda among others. To celebrate the 10th anniversary of his project, ROME has not only embarked on an extensive tour with concerts in Tel Aviv, Berlin, Athens, Los Angeles, Moscow, Kiev, Rome, Madrid, London, Vienna, Zurich, Brussels, Cologne, Stockholm, Bucharest, Prague and numerous other cities, but is also releasing a concise retrospective entitled  “Anthology (2005-2015)”. This selection features some of the most important works of ROME, songs of haunting beauty, moving through the hinterlands of fact and myth, and speaking of the greater context as well as from the heart. And as the ongoing tour has been showing, ROME just like Cash, Cave or Cohen before him, unites a diverse audience, of various generations, cultural and social backgrounds. This is then what true art comes down to. A man with his guitar. An otherwise empty stage... And so it begins anew.