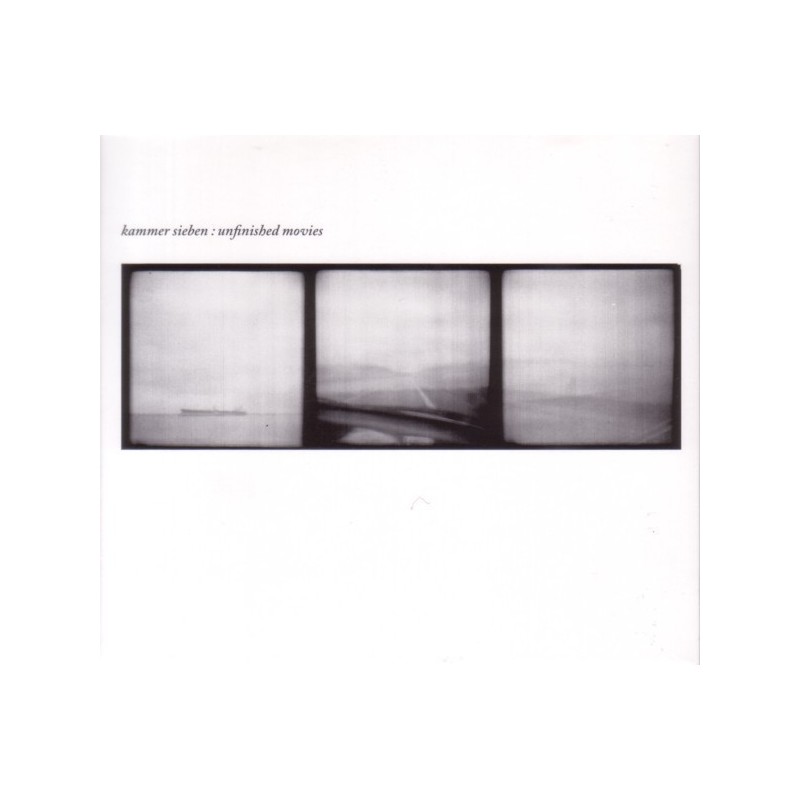 This new-born German duo revealed itself with the track "Dismembered Memories", included in the "Eisiges Licht 2" sampler.
Kammer Sieben are now back with their debut release, "Unfinished Movies", presented in extremely luxurious digifile folder : eight white panels decorated with blurred pictures of desolated landscapes, dwelled by ghosts and sinister unseen presences. The music itself seems to be strongly inspired by such type of images and the suggestion they conjure.

The compositions featured on the CD are quite different from each other, but all find a common denominator in solemn, dramatic and evocative atmospheres, evoked by a well-refined use of powerful keyboards, orchestral elements, marching drums and gentle, melancholic vocals, both in English and German.
While opening "Hello Amerika" would fit into the overcrowded "martial-industrial" area, following "Black Sun" sounds more like a neofolk song, or a closer relative to Dernière Volonté and Hekate.
But, it's the following tracks to reveal Kammer Sieben's real interests: texts by Richard Dehmel, Goethe, Christian Nonne sung on thundering and magnificent soundtracks to epic battle scenes, or narrated on introspective orchestrations which sound like the prelude to great events waiting ahead.
The epic "Flamme Empor", the mysterious "Pingo", the tribal "Them", the gloomy "Dismembered Memories", the fabulous "Blood", the all-consuming "Love Fragments"... each one is unique in its approach.

Kammer Sieben are sure to appeal to the neofolk and "martial-industrial" audience, but their real reference is to be found in the works of In The Nursery, especially those the Humberstone twins realized for the cinema.
"Unfinished Movies" is a promising CD that stays true to its very title: the music is a perfect collection of soundtracks composed for never-completed motion pictures, imaginary sequence of images rolling before the eyes of our mind.