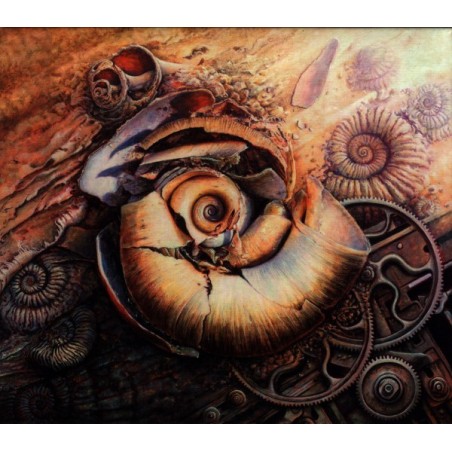 Timewaves presents moments of history in a flow of eternity.
Each moment may or may not be clearly connected with each other.
But when examining the past, does not every moment intertwine with some other moments, and suddenly everything is connected with everything in strange and unclear ways.

In Timewaves it is clear that those moments presented on the album are bound to civilisation.
Is it our civilisation, or someone elses, or just a dream? We don't know.
It may be even a nightmare. All we know for sure is that the clock is ticking.
But ticking for what? Good times or bad times? Hope or fear?

Peter Andersson (Sweden) is most known for the dark ambient project raison d'être and a bunch of other projects like Stravtm Terror, Atomine Elektrine and Bocksholm (a collaboration project with Deutsch Nepal).
Sometimes he releases albums under his personal name, mostly music for museum exhibitions and short movies.
The majority of the tracks on Timewaves has been used in various exhibitions in some Swedish museums.
This time the music is a bit darker, more industrial and experimental than previous exhibition albums from Peter Andersson, but still enigmatic.

Track list:
01 The Obsolete Work of Iron
02 On the Brink of Death, in Mud under Barbed Wires
03 Cold Attempts of a Blissful Obliteration
04 At Night I Wish I Fall Asleep
05 Any Second Industrial Insurgence
06 Time to Wonder