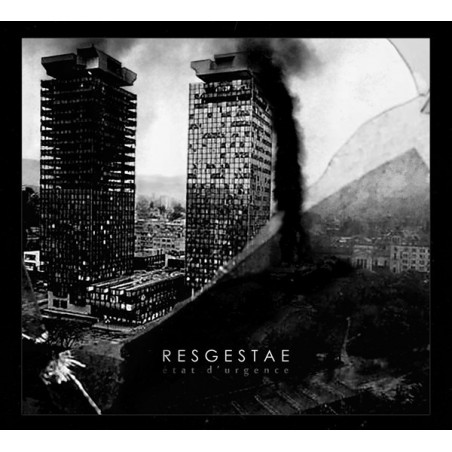 RESGESTAE is the project of Nicholas P., an experimental sound-artist living in Athens, Greece. He started creating post-industrial music in 2005 with a dark-ambient project called [distopia] which released a couple of full-length albums, split-releases and a few EP’s on various independant labels. From 2010, being infatuated with the dark-ambient and “horror” concept, Nicholas started experimenting using wave editing software, working with field-recordings and other sound samples. RESGESTAE was born. The name could be translated to “things done”, or the space of time that occurs from commiting a crime to the sentencing for that crime. RESGESTAE is influenced by contemporary politics viewed from a social prism. Nowadays, everything ranging from a discovery of a virus to the theoretical definition of a new field of economic competition is a political act that affects everyone’s social life. He’s also influenced by the works of W.S.BURROUGHS, F.NIETZSCHE, Aldous HUXLEY, CRITICAL ART ENSEMBLE, Jacques MESRINE and various street articles. RESGESTAE’s purpose is to compose contemporary power-electronics with both “cultural terrorism” and an esoteric aesthetic. For him, the “typical” power-electronics sound , mixing harsh electronics and up-front vocals has gone into hiatus. His purpose is to use extreme frequencies, samples and drones to form a deep sub-sonic landscape. This creates a cinematic experience incorporating true political, social and economic elements. That’s why this first release deals with media control, the deep state, technoscience and biotechnology. “Etat d’Urgence” is no more than a social control soundtrack, an experience in our daily lives of fear.