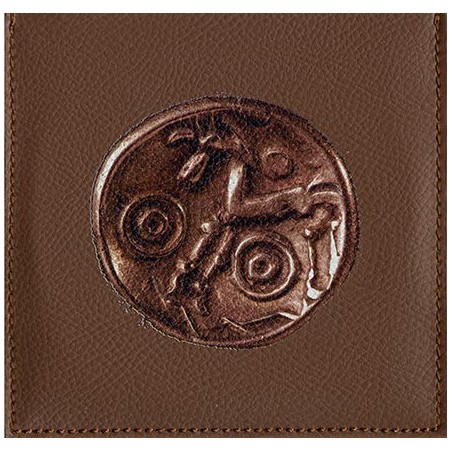 After releasing the MILITIA debut album into cassette (a split with CON-DOM entitled "Scorching Earth Policy") in 1995, Old Europa Cafe, 23 years later, proudly comes with the new and MILITIA album "AMBIORIX" devoted to the great Gaul King.
All sounds with the usual unmistakable MILITIA trademark, a big variety of rythms with loads of self made percussions and wind instrumets.
Songs are sung in different languages including Latin and Gaul.

The definitive MILITIA album, the album of their maturity.
Special Eco-Leather covers.
Covers available in some different brown tonalities and with 4 different logos printed on Eco-Leather Sleeves.
Also included is a 3-folded insert with cover notes.

Ambiorix, a musical story by MILITIA, based on Ceasar’s writings of “De Bello Gallico”

What happened before
When around 57 bC Julius Ceaser conquered Gaul, his troops marched into Belgica. (Belgica is more or less the state of Belgium plus a part of the Netherlands reaching to the river Rhine).

Belgica was inhabited by several tribes which were at war with each other frequently.
The tribe of the Eburons was lead by 2 kings, Ambiorix and Catuvolcus, both sharing power.
In 54 bC Ceasar had to provide his troops with fresh food and wood supplies and he ordered the tribes to cede a part of their crops to the Roman armies. Because the harvest wasn’t a good one that year and because the Eburons needed the wood from their forests for themselves for the coming winter, the Eburons refused.
Ceasar ordered his generals to built camps around the villages of the Euburon tribes, take over power and confiscate the food supplies by force.
Ambiorix and his Eburons were not to let this happen.

Music on the album and the story of Ambiorix >>

Track 1: Resistance
During the intro of the 1st track “Resistance”, you can hear “forest sounds”, like sounds of birds and insectsb and the wind blowing in the trees. The intro represents the situation of Romans entering the Eburon forest and starting to chop several trees.
The Eburons attack, the small group of Roman soldiers is taken by surprise and only a few can escape.

Track 2: Negotiation
Ambiorix and his Eburon warriors haunt the escaping Romans, but when Ambiorix reaches the Roman camp, he decides not to attack but instead he starts negotiations with the enemy.
The Eburon king explains to the Romans that he doesn’t mind their presence in the region and that he’s in fact Lucky with having them staying on his land, because their presence keeps other hostile tribes from entering Eburon territory.
Ambiorix warns both generals Sabinus and Cotta for the fact that a hughe Germanic army is crossing the Rhine and planning to attack the Roman camps.
Ambiorix advices the generals to move their troops to another Roman camp and join the troops there.
That way they would be stronger and capable of beating the Germanic warriors.
Ambiorix promisses the Romans a free passing through the Eburon lands.

Track 3: Arguing
The generals Sabinus and Cotta discuss all night long whether they should leave their camp or not.
Sabinus trusts Ambiorix and thinks it’s better to leave while Cotta prefers to stay in the camp and wait for the attack.
They cannot agree and only after Sabinus gets furious, hitting hard the table with his fist, Cotta agrees to leave the camp.

Track 4: Ambush
The decision to leave the camp has been taken and the Roman soldiers start marching.
There are two possible routes to the next Roman camp, one path was behind hilly landscape, the other through a valley.
The generals decide to go pass the valley and when descending, Ambiorix and his warriors attack, charging downhill out of the woods and straight into the indefensible flancs of the Roman army.
The Romans were slaughtered and a few were captured.
Noone could escape.

Track 5: Burning the Wicker Man
In his book “De Bello Gallico”, Ceasar described how the Gauls used to sacrifice their prisoners: the men or even women were locked up in a hughe puppet made of wood and straw, like a giant, and then this giant, called the Wicker Man, was set on fire, burning alive the prisoners inside it.
It was their way of sacrificing the captured Roman soldiers to the Gaul god of thunder, Taranis.

Track 6: Women of Gaul
Despite of Ceasar’s claims that Gaul women had nothing to say and were treated as inferior to men, we know from historical sources that some women occupied an important function in their community.
We don’t know if they were active in battle as well, but we know the story of the Celtic female warrior called Boudicca, who got beaten and witnessed her daughters being raped by the Romans.
She took revenge, lead her troops to war and burned down a few Roman cities located in Britannia.

Track 7: March on Gaul
Rome received the news about the beaten army and the resisting Eburons.
Ceasar swore to exterminate every tribe of Belgica. It was important for him to show the greatness and the power of the Roman empire, so this enormous defeat could not be left unpunished: a complete Roman legion and 5 cohorts (in all around 7200 men) was completely whiped out by just one tribe!
Ceasar sent a massive force to Belgica, a force never witnessed before.

Track 8: Calling all Gauls
At the same time Ambiorix united all other Belgian tribes to form a defending force against the Roman army that was marching to Belgica. Thousands of warriors stood behind Ambiorix.
They trained and prepared themselves for the great clash.

Track 9: War
This is the musical interpretation of the great battle between the Roman soldiers and the Gaul warriors.
You’ll hear commands in Latin and Gaul language.
Blood and mud, sufferings and death, victory and defeat.

Track 10: The Rape of Gaul
The Gauls lost the battle, whatever remained of the Belgican population was slaughtered and the Gaul villages were burned down: extermination, genocide, rape, plunder, massacres, murdering women and children, hostiges and prisoners became slaves.
It was the end of the Gaul civilisation.

Track 11: The Lost King
Ambiorix could escape and with a few warriors he succeeded in crossing the Rhine and hiding in Germania.
There’s no trace left of him and although sometimes Roman soldiers reported to have seen him, they can never catch him.
Ambiorix diappears in the dark mists of history.
We remember the great king who stood up against the Roman occupiers.
For evermore he’ll be a true Belgian hero in the hearts of all, in the hearts of Militia.