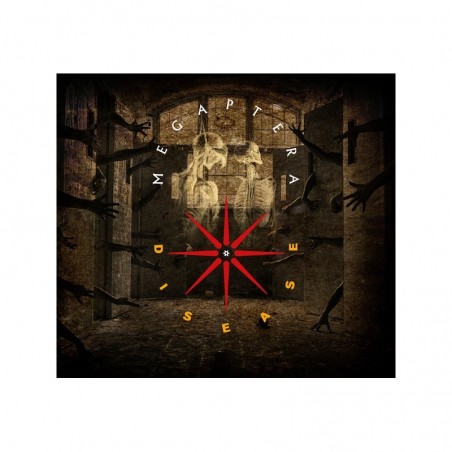 Megaptera have been a Death Industrial benchmark since their first recordings back in the early 1990s. The Swedish monster, led by mastermind Peter Nyström (Negru Voda), embodies the most disturbing and gruesome art there is. Alongside other legends, such as Archon Satani, In Slaughter Natives, or Atrax Morgue, the project has haunted our sheltered lives with their highly oppressive sound ever since. The album "Disease", originally released in 1996 by Art Konkret, is no exception to the rule. It is Death Industrial at its best - grim, terrifying and ghastly. The album is bulit like a psychological horror soundtrack, not as harsh as its predecessor - "Beyond The Shadow", but it is darker and will definitely crawl under the listener's skin. The 2018 version is not a mere reissue, though, as it is completed with a brand new 10-minute-long track, which includes additional sound by John Stillings (Steel Hook Prostheses). Mastered by Henrik Nordvargr Björkk (MZ.412). Presented in a 6-panel digipak with artwork by Kellerman Design.