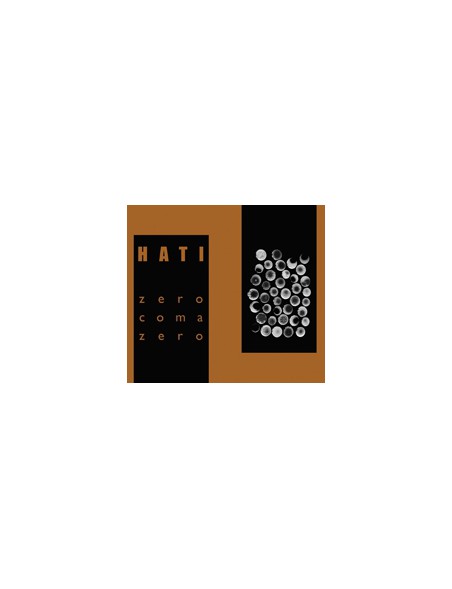 The album was originally released on Nefryt on a CDR limited to 250 copies. Now it sees the light of the day again, with new cover, new master and additional tracks from "Recycled Magick Emissions" MCDR (released on Nefryt sister label-Malachit.) Despite the years, the material gathered here is still sparkling with untamed energy of acoustic sounds. The musicians built their own sonic constructions and used exotic instruments in an intriguing way. "Zero Coma Zero" is a study of dying, death and rebirth-the objects used on the recording were either archaic ethnic instruments or they were found in the junkyard.

Both releases gathered here (plus the Drone 7" single) were groundbreaking in the history of HATI. "Zero Coma Zero" album established the project's position on the music scene.


It is proved by numerous enthusiastic reviews from that period:

"There's a really elegant economy of means about HATI's approach to music- out of quite humble, often improvised, acoustic instrumentation, they manage to create eloquent and evocative works. I'm tempted to dub what they do musica povera, after the arte povera art movement epitomized by the mixed media work of Joseph Beuys. But regardless of what you call it, HATI's music is innovative and inspired. As far as I'm aware, nobody else is doing quite what they're doing at the moment, although they have affinities with Z'EV (who's both toured and made an album with HATI) and ritual ambient acts like Terroritmo, COTA and Chaos As Shelter. HATI's work taps into some very deep, primordial, shamanic places."
(Simon Collins, JudasKissMagazine, 2006)

"HATI's third CD is certainly the most interesting, the most mature and the most varied album belonging to the duet. It penetrates the musical regions of 'deep listening'. /.../ As a whole it spreads through a slightly 'beyond the wall of sleep' sphere. Everyone can find a bit of
musical space for themselves."
Dariusz Brzostek (the original in Polish on www.vivo.pl/gaz-eta/gazeta17.htm, 2005).

"The Toruń duet's new material. HATI is ideal in its simplicity of composing archaic rituals into contemporary minimal music. However, it has nothing to do with academic outburst of ethno-folk scenes or childish seeking the darkness and cheap mystique. /.../ Iwański and Wojtaś are conscious and experienced musicians."
Wojtek Wysocki (the original in Polish in Aktivist 4/2005).

"We get a complex story that is told with simple language, which is not easy to do. What is more, it is not an intellectual babble or meaningless search for nothing. It's intriguing and coherent, telling a constantly serious story omitting the area of joke, humorand trivial misplacement."
(Henryk Palczewski, the original in Polish in Informator ARS-2 #41, 2005).

"recycled magick emissions, which is a 3" CDR where they reach the perfection of their sound. Densely layered, using reversed sounds, minimal changes and throughout mostly acoustic sounding. The all acoustic sound works quite well. It's drone related, but acoustic and highly atmospheric."
(Frans de Waard, VITAL WEEKLY, number 556, 2006)