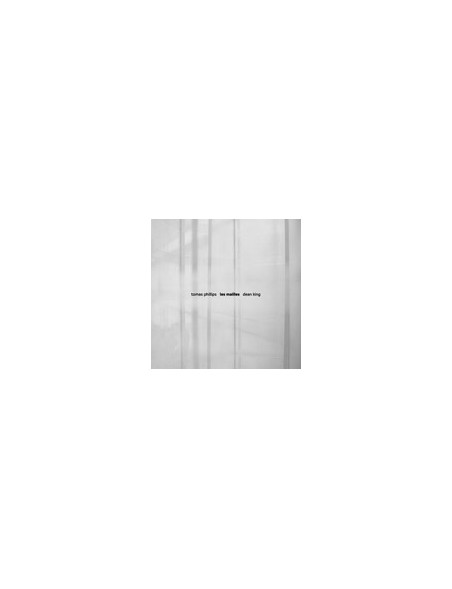 €6.00
Tax included
Last items in stock
Add to Cart
The duo of Dean King and Tomas Phillips came together in 2000 with the mere intention of exploring a shared aesthetic. Their aim was the achievement of a balance between digital and non-digital sound and a functional recognition of their differences in terms of utility and signification. Whilst computer technology remains central to their work, they make an effort to locate composition within a space of physicality. Hence the use of acoustic instrumentation and field recordings gathered on the periphery of laptops, they seek to foreground the act of listening in the slowly evolving tradition of microsound, without precluding the possibility of active and engaged harmony.

Tomas Phillips (b. 1969) is a composer, novelist, and teacher whose sound work focuses on improvisational performance and minimalist through-composition. He began composing electronic music in the early 90s, releasing limited edition cd-rs under such monikers as Sea Optic, Lisbon and Eto Ami (with Dean King), and also created music for installations and collaborations in dance and theatre. Tomas has taught in the disciplines of literature and fine arts at various universities in the USA, Québec, and Finland. Having completed his interdisciplinary PhD at Concordia University in Montreal, he currently lives in the USA, where he teaches literature at North Carolina State University. His previous works were released by 12k/Line, and/OAR, Non Visual Objects, Petite Sono] and Trente Oiseaux.

Dean King (b. 1970) began experimenting with tape loops, drones, and multitracking in the late '80s, and soon focused on musique concrète and systems-based pieces. As technology became more powerful and less expensive, he developed computer- based methods. His current work is based on a minimalist aesthetic and centers around the processing and manipulation of field recordings. Dean's musical interests include grain-based effects, narrow-band filtering, and live improvisation. He has collaborated with various individuals under the names Chronofon (with Ian Caskey, 1993-1995), Unwax (with Byron Poole, 1998), and Eto Ami (with Tomas Phillips, 2000-2003). He lives in Durham, North Carolina.

Les Mailles translates into English as "meshes", finely interlaced material that invites a certain transparency. Maya Deren's Meshes of the Afternoon relies on such opportunity of vision in order to communicate the inherent emotion of seemingly banal events, phenomena that go otherwise unnoticed at the expense of the character whose interiority becomes increasingly compromised in the unraveling universe of a film noir. Of course, accessing an inner life is not all storm and stress. In a context of quiet attention to slowly shifting movements, recognition of the microscopic may also yield productive insights into occurrences observed beyond the fabric of our inventions.