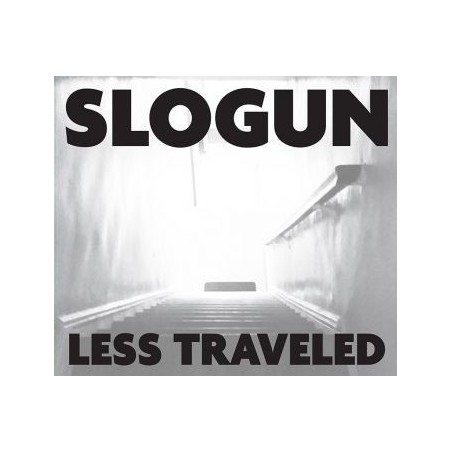 The full-length CD brings together two titles born out of his 2001 appearance in Mombris, Germany, “I Travel” and “How It Ends”, as well as a rare EP celebrating his April 2016 appearance at the OEC Venue CONGRESSO POST INDUSTRIALE in Bologna, Italy, “All But One”.

“I Travel” was originally released in limited quantity by Slogun’s own Circle of Shit label for his show with Dagda Mor in Mombris, Germany on September 8th, 2001, just days prior to the terrorist attacks on his native New York City.
Comprising five tracks, they are a perfect example of Slogun’s style at the turn of the new century, utilizing his early harsh analog layering along with scorching walls of noise prominent in mid-2000’s titles.

“How It Ends” originally appeared as a limited edition picture 10” on the White Rabbit label in 2002, born out of his Mombris show, though NOT a live recording as many have mistakenly stated in the past.
More in line with his later works, the six tracks give you that unrelenting walls of noise attack that was Slogun’s style during the “touring years” between 2003 and 2007.

Finally, capping off the release are the two long tracks from the rare acetate 12” “All But One”, which was released at the Slogun appearance in Bologna, Italy in April of 2016 for Old Europa Cafe along with other heavy hitters Sutcliffe Jugend and The Rita, featuring a more structured sound evident in the final albums of Slogun’s run between 2010 and 2018.

Of course all these tracks rely most on Slogun’s distinct lyrical style: raw, ugly, non-conforming. Lifting the veil on the notion of “humanity” and the human animal.

“Less Traveled” celebrates a life off the beaten path, lived regardless of the price that had to be paid.
The realization that what was taught was false.
What was explained all a lie. What was directed just empty promises.
The myth of "best interest" blown wide open as self-realization snuffed out all the empty promises. F.T.W.