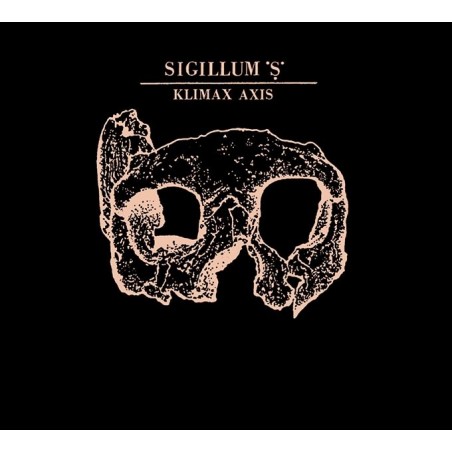 In order to celebrate the very first SIGILLUM S appearance at the OLD EUROPA CAFE "CONGRESSO" in Pordenone on May 14, 2022, OEC is re-issuing this historical production on CD for the first time.

The work appeared originally in 1988 on cassette (between the first 2 SIGILLUM S vinyl LPs), thanks to MISTY CIRCLES, and was re-released as a limited, vinyl-only edition in 1999 by OEC.
After having been available only through DL and streaming for many years, KLIMAX AXIS has now been re-mastered specifically for the disc medium by ERALDO BERNOCCHI and has been visually enhanced through a blackened repackaging by PETULIA MATTIOLI.

Here SIGILLUM S started shifting their early drones and layers into concentrated outbursts of maniac consistency, reaching out for initiatory spasms of disjointed rhythms and super saturated vocals:
this CD (even if only in a few copies) gives the chance to cruise again through these peculiar sides of the SIGILLUM S ever-changing evolution, while caressing a very special, fetish-like artifact… ignore at your own risk!