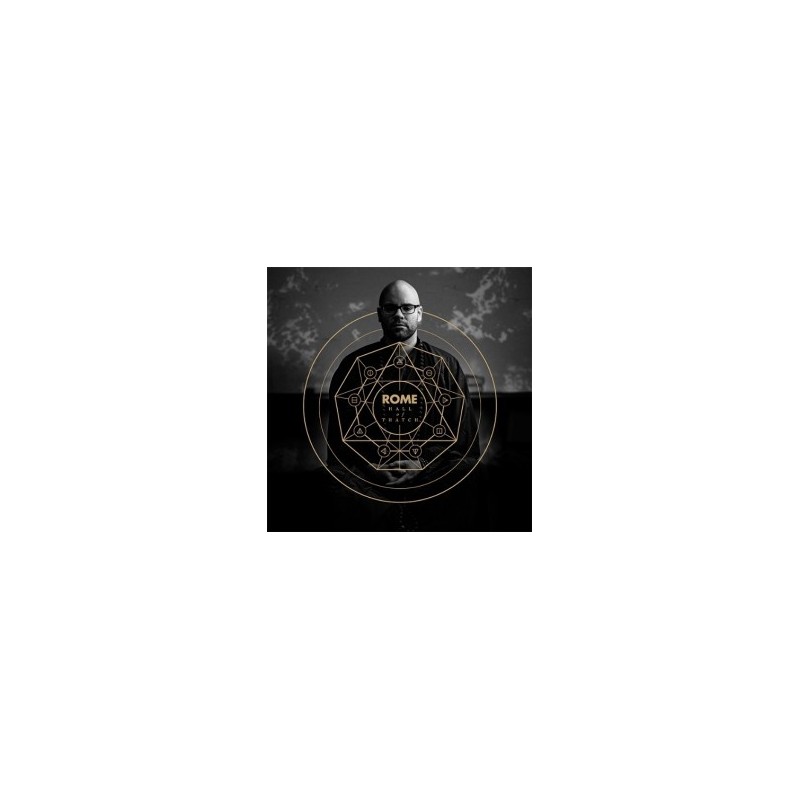 No, the Apocalypse is not the end of things; it’s a part of creation and an immanent process in the eternal cycle of becoming and ceasing to be. There is no evolutionary ‚thread‘ that leads us to believe in redemption. Even though on ‚Hall of Thatch‘, Jérôme Reuter – alias ROME – initially only confronts us with voice and acoustic guitar, one thing is clear from the first note: This is the beginning of something new. Like some dark, powerful storm, the album’s sound draws over the threshold of our perception. Rome much like Vergil, who as with Dante, takes the listener by the hand and leads him through the spheres of our base existence. Terms such as paradise, hell and purgatory, however, would be much too banal to describe the abysses of the present day. ‚Hall of Thatch‘ has an enormous impact.

Previously, ROME mainly addressed literary or historical topics, and preferably a combination of both aspects. Each album stood on its own, yet each begat the other. At least superficially, on ‚Hall of Thatch‘ he dispenses with that previous metaplane, in order to discover a new arena on the detour of a personal journey. The CD is much more introspective and thoughtful than most previous releases. ROME steers his boat down a dark stream of consciousness. „On the other ten albums (leaving out „Hell Money“ here), I mostly used a political, historical or philosophical context in order to disseminate my thoughts.On this one it’s rather more personal, but more on the metaphysical, transcendental plane.Where does the body fit in that realm between the spirit and the world?It’s neither about current events nor politics, but rather about a process of realisation that’s still some way off from being completed.“

There’s a history to ‚Hall of Thatch‘, however. Some years go, Jérôme Reuter set off for Vietnam. The country, its history, the culture and its relationship to Buddhism fascinated him just as much as the lifestyle of the people, who really did experience the Apocalypse half a century ago. At regular intervals, he played concerts at the most south-easterly point of the Asian mainland, and afterwards travelled across the land by moped. He himself called it his field recording trip. Many of these chants and prayers found their way onto the album, forming the framework for ROME’s new songs.

Now, it can be said that Buddhism is an easy subject matter. But despite tackling basic Buddhist thought, a Gregorian seriousness is nevertheless immanent in ‚Hall of Thatch‘. For Reuter, the spiritual element is present in the successful battle with his own inner demons. „The album is not the peaceful end product of that peaceful being that you eventually want to become, but it focuses the struggle that leads to this point.We obviously tend to have difficulties in letting go.On the album I try to make this negotiation along the journey from one state to another audible.Where am I, who am I, what would I like to be, what must I surrender to achieve this?The songs are the individual stopping points on this journey.The final song is more placid than the others.There’s something of an achievement there for me, but on a very small level.It’s not the peak of the holy mountain, merely the base camp.That’s all I can sing about, because I’ve not yet been any further.“

And in order to reach this peak, you sometimes have to go through hell, just as Dante did while holding Vergil’s hand. ROME’s basic sound has always been massive, but on none of the project’s previous albums was it ever so dark and powerful as on ‚Hall of Thatch‘. Reuter grants rays of light here and there, but admits that this time there is no escape. This is not music that you can just flop down to. ROME compares it to being thrown into some satanic barrel organ, where you are never able to come out of it unscathed. In this regard, the album can be filed in a row with those of acts such as Wovenhand, Foetus, Swans or Steve Von Till. Although at first glance, the new CD doesn’t have anything at all to do with current politics and is definitely not a protest album, it does indeed serve as an appropriate soundtrack to our times. ROME’s motto is that the time of banality is past. „The music is free of any kind of utopia or other values that politics or history could deliver.The status quo is utterly hopeless.You can no longer get to grips with the state of the world by deploying the usual approaches.We’re searching for new explanations, but can’t cede anything to a higher authority. Instead, we must all work out the answers ourselves.That’s hard work, and you’re standing there with both feet in the mud.In this respect, the album is definitely a reaction to all that’s going on right now.The majority of the diseases we have today are political diseases.When the outside world becomes just too much, we react with our entire bodies and collapse.“

Bang! A statement like a meteorite whose impact envelopes the Earth in darkness. The album is not supposed to be an escape, emphasises Reuter. Nevertheless, or perhaps because of this, ROME becomes a phoenix. By withdrawing into himself, he is able to describe his own resurrection. This moment is what imbues this album with its power, splendour and grandeur. The songs feel like a tautened bow that is waiting to fire the arrow. That may appear to be a contradiction in itself, but it’s not the only paradox on this record. The Luxembourger Reuter outed himself as a staunch European long ago. But ‚Hall of Thatch‘ is the most American of his albums to date, although this Americanness can in turn be seen as being very European. The CD characterises a provisional end point in ROME’s development curve, yet at the same time forms a basis for the future. The songs are charismatic without being missionary. In the manner of depth analysis, they sing of the state of our times, yet set themselves up as neither the rescuer nor herald of worlds. They are infernal, yet at the same time very intimate and vulnerable. However, Jérôme Reuter manages this without any kind of Ecce homo posing. Ultimately, it’s – once again – the stringent yet equally gripping work of a musician who always develops from album to album. He therefore has the courage to say, „The album is what it is.What emerges from it is presumambly… Nothing.I’ve said what I had to say and that’s all there is to it.“ An exceedingly apt conclusion befitting an album that nods towards Buddhism yet displays Gregorian features.