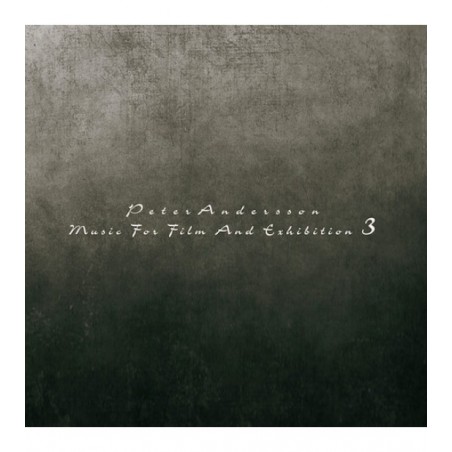 This is a different experience! It's very concrete and descriptive, and in some cases almost natural, but with always some twists making it much more magic and enigmatic than just the plain sounds alone. Exhibition music can be difficult to describe because they really need to be presented and experienced in their original context. It's about sound design and soundscape composition. The key to understanding the exhibition music presented here lies in the order of sounds and their combinations in layers and alterations through time. It makes the listener come closer to the sounds, to investigate in their meanings and roles within the given frames. It's like being a sound detective.

'Music For Film and Exhibition 3' is as the name suggests, the third album in this vein by Peter Andersson. It contains music for various exhibitions from 2011-2013 and also some recently found sketches for the 'Tulpa' soundtrack, which was released in their full and final versions on 'Music For Fim and Exhibitions 1' Technically this is the first album by Peter that has been mastered according to the so-called K-level standard, specifically to K-14. The K-14 system will ensure that the highest dynamic range will be preserved in the music. It will benefit the listener because the music will simply sound much greater than a hot or over-compressed album. All one needs to do is to give an extra push on the amplifier volume control to match the gain of a hot mastered album.

In Meditarivm - The Great Limbo [CD]

V/A - A Tribute to T.S. Eliot - Rose of Memory, Rose of Forgetfulness [CD]