Militia - The Face Of God [CD] 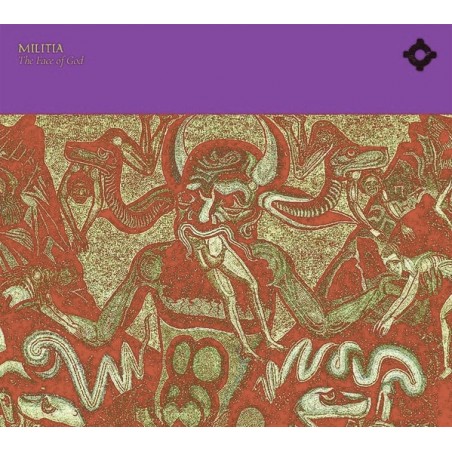 €14.00
No tax
Last items in stock
Add to Cart
This album was first released directly by the band in a special Boxed edition of which only very few copies was made available.
OEC is re-editing that CD album in a 6 panels digipak and this will be the only available format from now on as the band stopped releasing the special boxed edition!
Limited edition of 300 copies.

The Face of God" contains 11 tracks, a combination of industrial soundscapes and metal and skin percussions, wind instruments and vocals, in the best tradition of the Belgian industrial percussion band Militia.
Musically The Face Of God mirrors this bird’s-eye perspective on the broader history of western religion.
While it’s still firmly located within the martial and percussive industrial sounds, much of the record, especially its first half, manages to connote a pre-industrial, and in fact pre-modern mood.
The slowly rotating drum cycles of “Thank You Oh Lord” suggest medieval mills or the creak of wagons more than industrial factories, and the sampled church bells which drone throughout do nothing to dispel the murky feel of long dead saints. It’s not until close to the midway point of the record, where the dusty clatter and insistent core beat of “Sermon”, augmented with slight, sorrowful pads, that things seem to sound more like the byproducts of our own age. Interestingly, at the point where the music becomes more tense and contemporary, reactionary counter-Christian themes and ideologies fall under the lens (and don’t come out any stronger than their orthodox counterparts), almost as if a dialectic of religious positions follows in the footsteps of the development of industry.