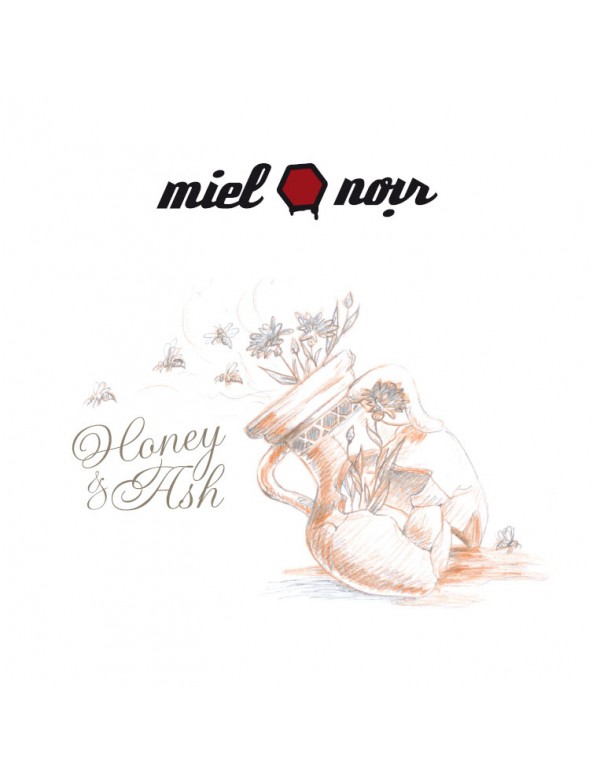 HONEY & ASH is the first album of MIEL NOIR as the joint-project of DIMO DIMOV (Svarrogh, Sturmpercht, Fahl) and MARCEL P. (Sagittarius, Allerseelen, Fahl). The album encompasses a variety of styles, ranging from Electronic to Gothic Rock, Apocalyptic Wave, Dark Ambient, Industrial and Neoclassic. The 2 multi-instrumentalists are supported by GERHARD HALLSTATT (Allerseelen) as guest-vocalist on 3 songs and 2 female vocalists known for their work with Allerseelen and Sagittarius. The CD comes with a richly designed 20-page booklet; the limited box-set with a 3” bonus-CD and a honey-scented beeswax candle.

The songs on HONEY & ASH couldn’t be more diverse. “Honig-Göttin”, already known from the compilation “Pagan Folk und Apocalyptic Psychedelia - Kapitel II”, could be the rock-oriented version of DIE WEISSE ROSE, “The burning season” is reminiscent of the best days of FORTHCOMING FIRE, „Dunkle Waben birgt der Fluß“ (with vocals by GERHARD HALLSTATT) would have been at home on many COLD MEAT - releases, “Sonnemann” is a club-hit par excellence, “Black waves rising” is reminiscent of the “Wildhoney” – phase of TIAMAT, “Der Himmel fällt” is pure Angst-Pop and “Schwarzer Honig” shows GERHARD HALLSTATT’s vocal styles known from ALLERSEELEN - concerts.

Some of the material has already been performed at concerts in Spain, Croatia, Denmark and the Netherlands. Each of the 16 songs has been illustrated by the artist Claudia Summerer with beautiful drawings, visualizing the topic of each track. The album was recorded at Dungeon Studio (Rhenania) and Vitosha Studio 4 between 2008 and 2010. The Mastering took place at Luftschutzkerker in 2010: www.luftschutzkerker.com

mp3:
Das Honig-Opfer
The Burning Season
Its Me