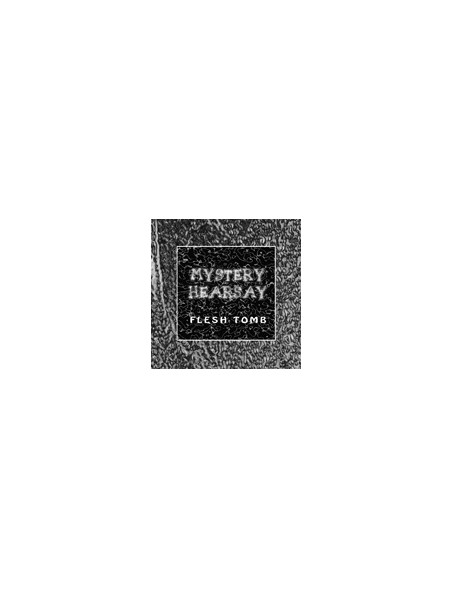 The music of Mystery Hearsay is synth/guitar based old school post-industrial from the 80s, the classics of hometaping aesthetics, psychedelic noise trips with some rhythmic parts and fuzzy vocals. This is the first proper CD album including the remastered tracks from "Flesh Tomb" tape, and from "Unifur" tape originally released as LARB album back in 1986.

Mystery Hearsay is the primary name for the solo sound project and label run amuck during the 80's and 90's by Mike Honecutt. Mystery Hearsay cassettes started with the first solo release in 1983 and later expanded to release a C-90 compilation titled [Broken Playgrounds]. The following years would expand into more compilation releases with the [Total Recess] series Grades One through Six. How did it all begin? During the early 8O's - Alex Douglas published a magazine called "C.ontact L.ist of E.lectronic M.usic (= CLEM)" which introduced me to the indie cassette network. "CLEM" was an indepth guide to people,places and organizationz active in promoting D.I.Y. (do it yourself) music, radio and events/festivals. Indie Labels like Insane Music Contact, Integrated Circuit Recordings, 3RIO Art, Illusion Productions and many more were discovered in the pages of C.L.E.M. and other Publications,Zines and label catalogs.

In 1980 Mike started producing a weekly radio show on local college and volunteer stations. A two hour program continues today extending a span of over 30 years. There was also the occasional cable public access program in the first two decades of the last three. The end-product triple play of musician/producer/labelhead,mailart/art/publisher,Video/distro/editor host of too many radio/visual showcases did indeed fester. Mystery Hearsay has always hibernated and hidden in the uncomfortable cavernous depths of things deep and dark. Forays into the lighter side of sound always succumbed to the origins within the earthy and black mystery better left to ghost and gossip. All guitars aside, there was our recruitment into the Downtown Memphis club [Barristers] a last call House band The Four Johns. The various live shows were but a continuation of the one long song din. Not limited to only four members a troop of Johns were corralled into the infamous RED tape release and slotted onto a local compilation 7 inch. Other solo ventures into the more structured (?) science of sound may be traced with some investigation. A couple of early departures from the Dark rumbling experimental chaos are the Harsh Reality and Audiofile releases that steep in the vein of Euro-progressive inspired Psychedelic space noise transition on a mission. Other cassette release on Sound of Pig,SSS productions,Midas Tapes and others lurk in the deep.

Crawling back from Die-hard damnation and clearing out the cobwebs in 2004 one will find the trilogy of Zeromoon CD-r releases. These along with a interpretation 3 inch release curated bit by bit ala Cornucopia crew of Jorge Castro (PR) are all available on www.archive.org. The submitted tracks were cured and preserved by MC Ladno aka Jeff Surack of uber intelligence and organizer of Sonic Circuit festivities - a master of Quantification with a CAPITAL K. Here and now we retro blast into the end of 2010 when the lid was about to drop on the tomb. Sprouting from a chance meeting in northeast tennessee the burial ground gets raided again. Thus Kuwahara was birthed in the lab of M. Peck and his label Waiting World Records. The debut CD release [Honeycult] opened the womb for the Cultivation series of interpretations and remixes. Volume one contributions by Wilt,Lagowski,Steve Brand,Brian Sanders and topped off with two newer tracks. It is insane and impossible to compress three decades into a few paragraphs. There's just too many tombs in the plot. We continue to turn the soil... at www.mysteryhearsay.com.
1. Opening the Tomb 01:00   2. Into the Tomb 04:21   3. Decent 09:42   4. Burial Ground 06:44   5. Cavern 06:14   6. Sunken 02:11   7. Bellow 05:30   8. Resurface 04:30   9. Underground Base 05:40   10. Re_X_cavate 10:12   11. Dualing Axes 02:24   12. Tomb Meld 05:01   13. Swizzer Zee Wheat       02:11   14. Island Plot 03:52   15. Cry [silently] 04:52
Reference 680 Category M Brand Monochrome Vision
Quick View