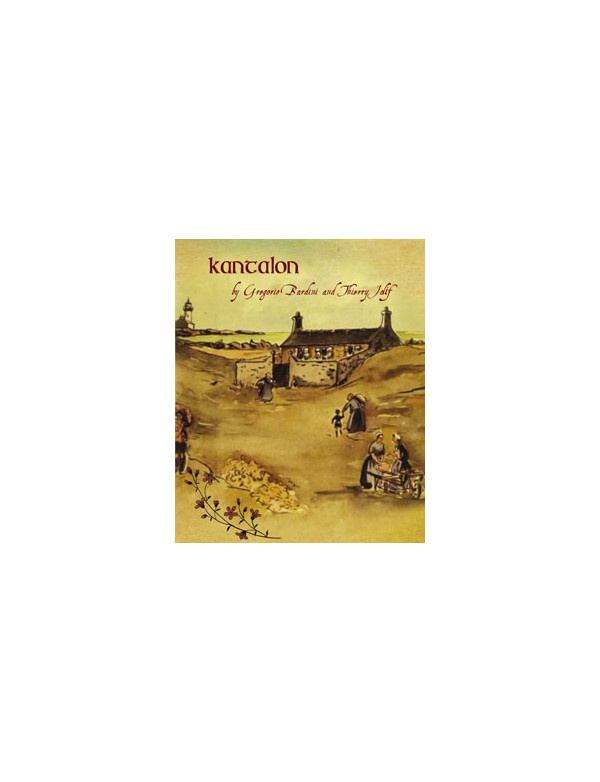 Compositions and popular songs of Brittany.

Kantalon is an ancient Gaelic word, it refers, in this old Celtic tongue, to the «chant» but also to the lessons that the druids were teaching to their pupils. This name has been found engraved on a votive pillar, so we could see a symbolical link traced between the knowledge the druids were transmitting through the oral, and often singing, courses and the pillar rooted deeply in the soil and with his peak touching to the skies, sacred domain of the invisible. By the years has been transmitted in the old Celtic land of Brittany, many popular song in the Celtic local tongue. Of course those songs they had nothing to do (or so far) with the teachings of the ancient druids, but often they are also «lessons». Lessons about events of the past times, mainly sad events, stories of crimes, of battles, of losing ... Sometimes the exact subject of the story is not so easy to recognize, sometimes the words are quite obscure in their meaning but most of the times, with a little feeling of what really means symbolism, we are able to find the real and concrete spiritual meaning of the song. As the Kantalon is rooted into a particular soil so we are, and those songs are too, they belong to us because we belong to this particular ground and country even if we are living in a time far away from the time in which they were created. So we took those songs not «as they were», but as they could be now, with all the musical background we had inside of us. We had worked on this distance between their origin and us as a real musical matter. Our aim was not to try to do a kind of mix between medieval music and modern one but to express the spiritual reality and complexity of those lyrics and melodies into our own musical field as if those songs made a travel through time and had to pass through the filters of modern music (experimental, concrete, classical, free-jazz, industrial ... and so on) to reach our brains and our instruments.

"Kantalon" is a Gaelic word which means "chant" and has it’s deeply connections with Celtic tribes and its lessons refering tales, battles and more, which are sang or spoken form which were transmitted from generation to generation. From such perspective Bardini & Jolif, developed an album surrounded by a mystical medieval aura through 8 folk compositions dressed with an enchanted ritualistic atmosphere from start to finish. Just hear from example "Merzhin Et Arthur” created through spoken voices in French taken from poems from Gales and Brittania. Moving into dense flute melodies and percussive elements are of this tracks one of the best here. Or just take a look at "Bretagne Aux Monts Sales" and its enigmatic percussive soundscapes and indie oboe melodies crawling together spoken voices to create a perfect exposition of diverse soundcapes able to transport you to another existential reality."Skolan" is more a beautiful melodic composition with such flute elements and spoken voices which keeps your senses awakens all the time. And what about the instrumental track "Arwezeen Avalou" and its mystical dance generated through ritual percussive elements and diverse wind instruments collapsing all the time to create a very interesting piece here. It’s so difficult to categorize this release due the diverse elements included here and there but the truth is that this release is just brilliant in its execution and how the music is perceived when hearing it deeply. A medieval folk voyage to the very roots of Wales and Brittany, coming in a 6 page full-colour laminated fold and limited to 500 copies only offer us the opportunity to explore the Celtic Folk music in all its splendour.