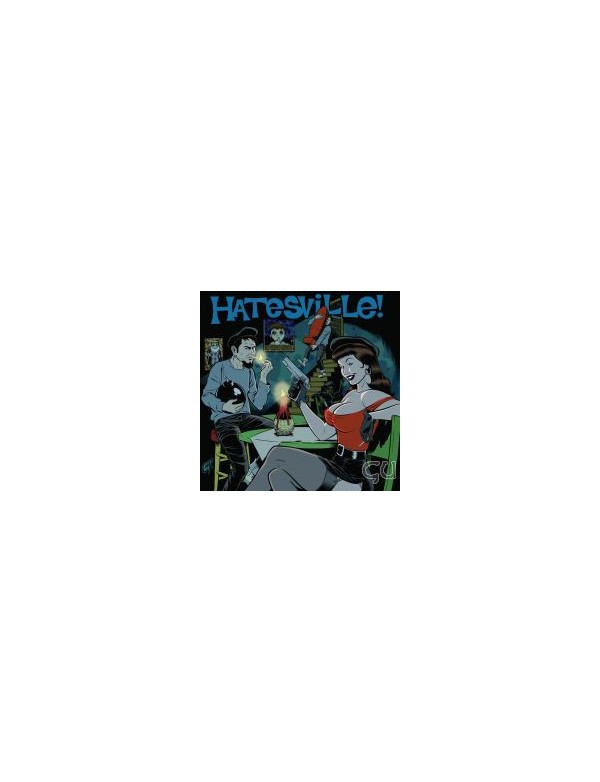 Back in stock, the black 12" LP edition.

“Hatesville!” is a collection of songs by The Boyd Rice Experience, The Partridge in the Pear Tree, Adam Parfrey and Jim Goad.

It was orignally released in 1995, but quickly went out of print, and has  – until today – commanded absurd prices from collectors. This new edition has been completely remastered and features three new songs. Best of all, it’s available for the first time on vinyl. Famed hot rod artist Coop, whose black & white artwork appeared on the 1995 version, added color to the artwork for the new edition. No expense has been spared for this reissue.

Boyd Rice’s biography is extensive and includes numerous albums, books and film appearances. His musical career began in the 1970s when he performed and recorded as NON. In the mid 1980s he became involved in the Church of Satan, and later launched a Social Darwinist think tank called The Abraxis Foundation. He has performed and recorded with Douglas Pearce of Death In June, Michael Moynihan of Blood Axis, and famed industrial percussionist Z’ev. His newest book No is a collection of essays. He presently lives in his underground bunker in Denver, Colorado.

Adam Parfrey is best known as the founder of Feral House, a small but influential book publisher, with titles like Apocalypse Culture, Lords of Chaos, and Jim Goad’s Giant Book of Sex. He’s always had an interest in music, and released two albums and a number of singles in the 1990s, including S.W.A.T - Deep Inside A Cop’s Mind: The Soundtrack for the Next Police State and A Sordid Evening of Sonic Sorrows. He lives in Port Townsend, Washington.

Jim Goad became famous (or infamous, depending on your point of view) for his magazine Answer Me!, which he published from 1991 to 1994. He contributed to the S.W.A.T recordings, and released the album Truck Drivin’ Psycho in 1996. He has authored several books, including The Redneck Manifesto and Shit Magnet: One Man’s Miraculous Ability to Absorb the World’s Guilt. He runs jimgoad.net, and lives in Atlanta, Georgia.