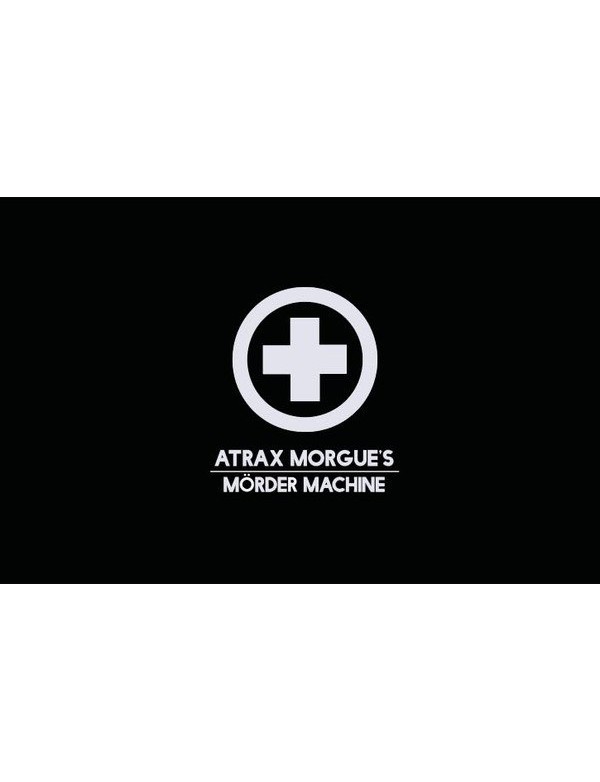 Two reels full of unreleased Marco’s sounds was discovered after his departure by his good and old friend and partner in muzikal crimes Davide Tozzoli (Davide might be better known for his solo project “N.”).

Those are the very last ATRAX MORGUE sounds, a sharp, cold and uncompromising analogue testament.

The sounds of those 2 reels are going to be released into a CD and a Music-Cassette (the MC likes also to be a sort of tribute to Marco’s work as the owner of one of the oldest Italian tape-labels involved with Industrial sounds).

Also included in the Box are the CD re-editions of the 2 MÖRDER MACHINE albums “Deathshow” and “Happy Birthdeath” this second album was previously released only as a very limited tape.
MÖRDER MACHINE used to be a sort of live incarnation of ATRAX MORGUE in which also voice had a large space as in the beginning ATRAX MORGUE sounds was non-vocal.

For give a better idea of the ATRAX MORGUE LIVE SETS the Box is completed by a DVD including 4 live-shows, 2 of those was filmed during 2 different CONGRESSO POST INDUSTRIALE (the historical OLD EUROPA CAFE label-festivals) and never seen before, while the other 2 sets was previously released as VHS video-tapes in very limited editions on SLAUGHTER PRODUCTIONS, Marco’s own label.
The quality of the visuals is not the best one (a couple of them are real bad quality) but all of the videos have, in our opionon, a very good underground feeling and give a perfect idea of Marco’s live sets.

Don't expect a very professional video but a very much underground and rough DVD.

NB: the DVD might have some problems, mainly with the menue, on some DVD players....

A simple black box with small silver logo includes all of the items plus a couple of inserts...The whole is released follwing (if possible) the old way of releasing tapes, discs come in card-sleeves with simple b/w photocopy effects, same for the MC.

was often performed. the repertoire of the Incidentally on Marco’s record player, after his suicide, there was the vinyl of the soundtrack of the film by Louis Malle taken right from the same novel of La Rochelle. It was probably the last album that Marco listened to before committing his final gesture and then resolve, finally and dramatically, his inner conflicts In this selection we added also the repertoire of Marco as Mörder Machine. There are some who consider Mörder Machine as a sort of flip side of Atrax Morgue . What is certain is that in the live shows of What is certain is that this background noise inevitably, today, we, his friends, perceive it as an audio metaphor of a delicate mechanism that then got jammed and compromised so seriously as to fail hopelessly, irremediably, once and for all In “Will-o'-the-wisp (Le Feu Follet)" Pierre Drieu La Rochelle wrote " Suicide is the means of men whose resilience has been eaten away by rust, the rust of the daily round. They were born for action, but they have delayed their action; so action turns back on them with the swing of a pendulum" A corroded resilience, a malfunctioning machine. Or maybe we just want to interpret it as one of the many messages that still come from the memory of a dear friend that we lost, who among us could ever say that?>>>>>>> The unpublished material collected here has been found in the recorded tapes that Marco left in his studio .In particular Davide Tozzoli clearly remembers that in order to record this material our mutual friend used an old Korg MS20 synthesizer which was so battered that, together with the audio signal, it emitted a continuous background noise that is clearly audible in the recordings presented here. During the audio assembly we decided not to cancel this hiss because it seems now impossible not to interpret it as a completing part of the opera.

In other words a "musicidio" (music-cide), a term by Corbelli described the the “killing of music. A result that he wanted to pursue with the aid of machines. I find that these words of the French thinker are more than suitable to illustrate both the artistic practice and purpose to which – conceptually - Marco tended . Guattari in "Caosmosi" highlighted that "Nowadays current habits would like machines to be considered as a subset of technology. On the contrary we would consider the issue of techniques such as over-determined by the machine . The machine becomes preliminary to technique, rather than being its expression."

" It is the aesthetics of “nothing” [ ... ] (appeared in Issue 1 of " Interferenze Postnucleari " in the year1997 ) , which explains the poetic background of his artistic workThere is not much else to say, just open your ears and listen, for example to “Musica per cervelli morti” (Music for dead brains) a track on the album " Deathshow " here attached . Such track is nothing else than the recording of the audio signal produced by a broken synthesizer Crumar Bit One Dead ( ... even this! I still remember today that also the external “chassis” of the machine in question had visible rust stains!) which continued to emanate the same fixed and constant noise. As a final gloss I cannot but use the words of Marco Corbelli himself, taken from his written "Negazione sonora ed estetica del cadavere (denial-sound and aesthetics of the corpse)" A machine (a human one? ) running frantically toward self-destruction." <<<<<<< DEVIS G. (English translation by Luca Carlin)