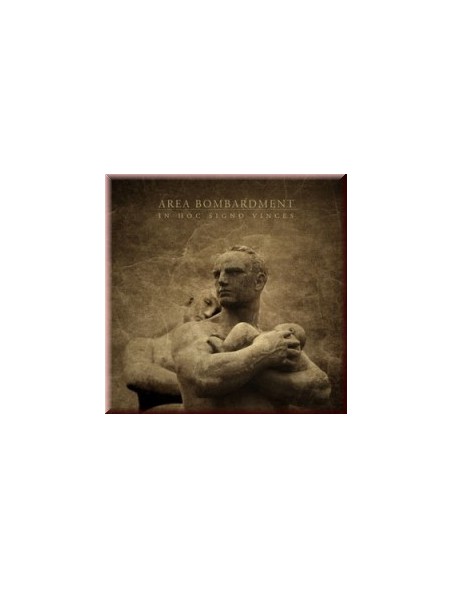 AREA BOMBARDMENT was formed 2007 in Ireland by Michael P. It started out as an experimental music project, taking a large influence from bands such as NON. In that year the „Carpet Bombing“ tape was released, musically it was firmly in the Noise / Dark Ambient style. In 2008 a follow up release entitled „Operation Archangel“ was released. Feeling he had taken this style as far as he could with this release, Michael focused on making music which was more natural and created the atmosphere he desired. Two tracks were recorded for compilation albums and following that the „Iron Will“ album was recorded and released in 2009. This was a big change for the band mixing the early elements of the band with Martial, Electronic and Neofolk. In late 2009 Michael began writing material for a new album. Determined to make a lage step forward, he started using much more professional recording and musical equipment. In the winter of 2009/2010 the „In Hoc Signo Vinces“ album was recorded. It is a varied album the main parts of which are Martial but also containing Dark Ambient and Neoclassical style parts and could be compared to such bands as Arditi and Blood Axis. The tracks on the album deal with such themes as Irish and European history, philosophy, war, nature, culture and disaffection from the modern world. It’s atmosphere is dark yet positive, igniting the flame of determination and unwillingness to succumb to the values of the modern world, harking back to the ancient values of honour and loyalty. German based „Lichterklang“ label offered to release the album, which was then mastered by Axel Frank (Werkraum). The artwork was created by Haate Kaate (Allerseelen, Svarrogh!)